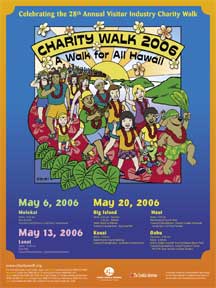 Matt chaired the Hawaii Hotel Industry Foundation, as well as the Visitor Industry Charity Walk in 2006, and helped lead a statewide effort to raise a record $1,050,000 in one day, with over 10,000 walkers.

In 1974 the Hawaii Hotel & Lodging Association sponsored a charitable "Superwalk" to benefit one major charitable organization. Over the years, the HHLA's annual walk has grown to become one of the largest single day fundraising events by a non-profit organization in the State of Hawaii. In 2006, under Matt's statewide leadership, the Charity Walk raised a record $1,050,000 in one day which gave back to over 160 local charities statewide. In addition to the record breaking year, 2006 was the first year that all major islands participated in the Charity Walk including the islands of Molokai and Lanai. The Charity Walk funding goes to help not only our co-workers, but also our friends, family and neighbors too.